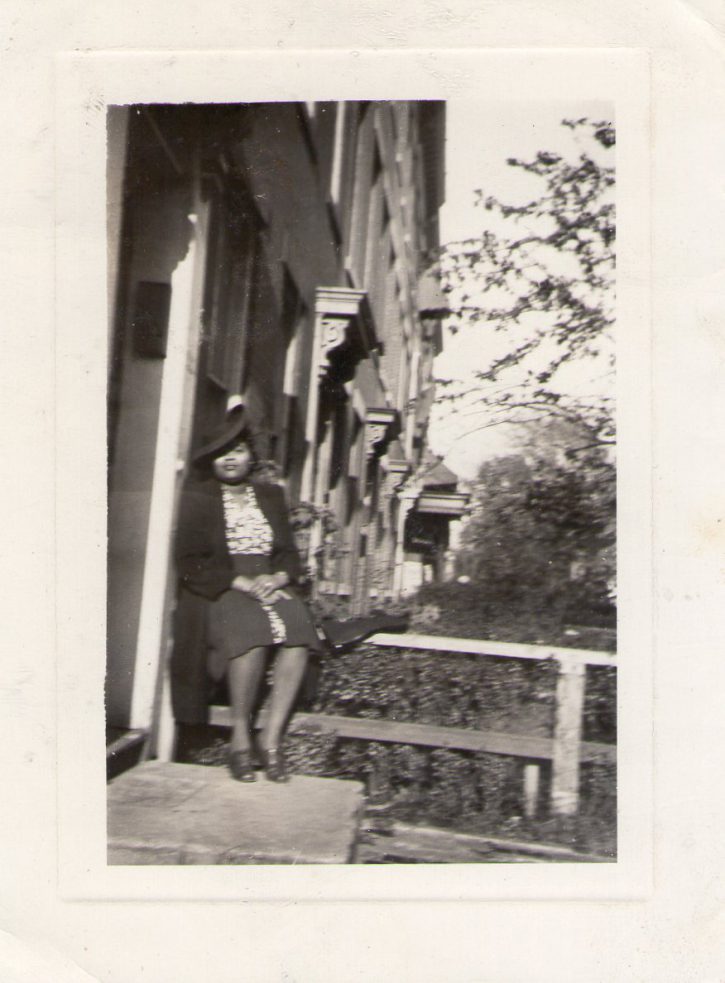 If the gift of Christ to the world was love, then he bundled it up and placed it in a short, round, colored woman with soft curly black hair, and a laugh that set up home in your heart. She would throw her head back, and start with a loud, shrill, holler from the pit of her belly that no one forgot.  I was raised by a woman who personified the meaning of giving. Her name was Fannie Lee Carmon and she carried the spirit of giving in her heart year round. Fannie, Momma to me, and Big Momma to others was always helping others in some way or another. Raising a child that was not her own without asking anything in return, was just one of Fannie’s ways of helping.

Momma was known for her laughter and her cooking.  Her gift to others was always one of unconditional love and compassion. Momma didn’t have a lot but she had a big heart and the willingness to bring a little piece of happiness to those who crossed her path. Giving was Fannie’s joy. Fannie never had any children of her own but she loved all babies as if they were her own. God blessed her beyond her dreams when she became a nurse in the newborn nursery at a local hospital. She used to sit and rock the newborn babies while humming some tune that she simply made up as she went along or an old spiritual.

To Momma, happiness was either rocking a baby or baking a cake or pie, sweet potato pie to be exact. I can remember Momma staying up late many nights, well after midnight to bake a Sock-it-to-Me cake for someone’s birthday, or a pineapple cake for someone’s graduation, or a pound cake as a get well incentive.  She would come home from work in the morning after taking me to school and stay up and bake a cake to be delivered later that day. She could come up with a never-ending list of reasons why she had to bake something, a cake, a pie, a casserole, something.  Or maybe someone just got home from the hospital, she would cook dinner and bundle the entire meal up and take it to them so they wouldn’t have to cook for a few days. I can remember a time when she would make 21 sweet potato pies for the church every Saturday. I didn’t understand why she would tire herself out so. It seemed as if she was driven. She had to bake something to give to someone who either needed it in her opinion or requested it, she never said no. It seemed to me that she thought the cake or pie itself brought happiness into that person’s life and she just couldn’t say no to that.

There were times when I would get so frustrated with Momma and scold her for wearing herself out for others so much. She worked the graveyard shift from 11-7:30. which takes a toll on anybody. I tried to explain to her that It was alright to say no because she had to work or because she was just plain tired, people would understand. She would look past me and quietly say, “It’s nothing, it won’t take me long to do this.” I would let it go for a while until I would see her nodding off at the table again. She rarely took off from work because to her, rocking a baby wasn’t work at all, it was her joy. So Momma would just keep on trudging on.

Momma is gone now but I haven’t forgotten her legacy to me of sharing love, giving, and compassion. She would be glad to know that I finally did grow to understand what her giving was all about. I know now that her giving to others was a gift to herself as well. I discovered this one day, shortly after her death, when I befriended someone in my apartment building who I only knew in passing. We both have lived in this building for several years and at one time we lived across the hall from one another but never became acquainted. She looked so broken on the elevator one day. I could see fear in her eyes and panic on her face. She was standing there holding on to the handrail for dear life. I just couldn’t leave her there like that. I invited her to my apartment for the first time that day and to my surprise, she stepped off the elevator and said yes. I expected her to say no since she had always stayed to herself. She told me her story while I fixed us both a cup of tea and hung on every word. Out of all of the drama in her life, the one thing that she was the most hurt about was the fact that she couldn’t give her youngest son a birthday gift that day. She sat there at my kitchen table and cried. I felt so helpless because, at the time, my family of five was living off of one modest income. After she left I thought hard and then I remembered Momma. Momma had passed away only a few months before so she was still at the front of my mind. “What would Momma do in this situation?” I knew instantly. Momma would bake something and that, I could do.

I spent the last few years with Momma learning how to cook all of my favorite things. I also learned to keep a few boxes of cake mix in the kitchen cabinet. When the grocery stores would have a sale on cake mixes, $0.89 a box, I would buy several boxes and the packaged frosting too. Don’t think Fannie didn’t teach me how to make a cake from scratch, she did. When times get tight there’s nothing like a homemade cake to take the edge off and a box cake was quick and easy. So there I was with a new baby on my hip and a cake mixer in my hand. I baked a chocolate layer cake. When I took my creation to my new friend’s apartment and knocked on the door, I started to get cold feet.  I hoped she wouldn’t take too long answering my knock. I was afraid that she would be offended, after telling me her story all I could come up with was a homemade box cake. When she answered the door and invited me in, I gave her the cake and told her it was for her son’s birthday. She cried a river of tears and hugged me tight. Once she could compose herself she let me know that she had never had anyone bake her or any of her children a cake.

Well, I can’t describe the relief and joy that I felt from giving what seemed to me a very small gift. In the larger scheme of things, I felt that what she needed to make life better was much more than a cake. Or was it? I do know that at that time in my life, cake was all I had to give away. The joy that I saw on that women’s face justified for me all of those nights Fannie spent losing sleep so she could give someone a cake or a pie.

I thank you, Momma, for teaching me about the joy of giving. You taught me by living a life of love, compassion, and giving. The lesson learned is one of giving from the heart. The gift to others is a gift to myself. The joy is in the giving. The simple act of caring and loving enough to give from the heart is reciprocated. It’s true that when you give you receive when it’s done from the heart. All parties involved feel the love and joy.

Fannie's Place is a state of mind, a collection of memories told as short stories. I was raised by a very special lady named Fannie Lee Carmon who loved me as her own. She never had any children of her own but had a place in her heart for all babies. The most profound stories in my life start with her, at Fannie's Place mid1950's. Pause in your busy day and relax as I share my stories with you. View all posts by Fannie's Place