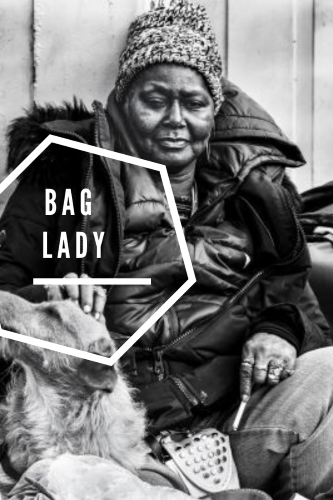 She wore purple from her head to her toes. She wrapped her head in purple cloth, and wore layers of purple tops over several skirts all long and nearly touching the floor. She would have so many layers of clothing on at one time she looked three times her size and much taller. She dyed all of her clothes purple before she would consider wearing them, to “ward of evil spirits”0 she said. She would laugh on occasion showing two teeth in an otherwise empty mouth. I’m not sure how old she was, but her hair, when she would uncover it, was snow white. I was always a little afraid of this lady in purple, whose name I can’t remember. Maybe I was scared of her because she stayed to herself in a dark corner in the dining room and sometimes in the empty room in the basement of this Chicago rowhouse my family came to live in.

I moved from Washington, D.C. to Chicago to live with my maternal mother, Nannie, in the early 1960s, but that’s a story for another time. One summer before my 12th birthday Nannie, Momma, moved us to a room in a home owned by an elderly friend of hers from church, Mother Stewart. There was one other boarder in this home, a purple bag lady. At first, I thought she was just another boarder like us who needed a temporary place to stay. She would sit in her corner alone, talking and laughing to herself or singing old spirituals. That might have contributed to the fear I had of her, just a little. She would have all of her worldly possessions on the floor around her, like little pods in paper shopping bags tied together in clusters by pieces of cloth pulled through their handles. In the early morning hours she would gather her bags and head downtown to Roosevelt Park or sit at the bottom of the ‘L’ at 63rd and M. L. King Ave. She would stay out all day and return around sunset. Then she would sit amongst her bags olding and unfolding her things, organizing them in a way that made sense to only her.

Mother Stewart, on the other hand, was an elderly, quiet, petite brown skin lady. She would interact with others, hold conversations on the phone, and attend events. When she wasn’t dressed for church or some special occasion, she would wear her natural hair in four braids. Until we moved in, I had only seen her on Sundays in her “Sunday-go-Meeting” clothes and matching hats. Seeing her dressed in casual clothes was an adjustment for me. Compared to the Bag Lady Mother Stewart had a full mouth of perfect teeth, although I suspected they weren’t all hers. She had a gentle demeanor of strength and confidence. Usually, she only spoke when spoken to but I could tell that she was always listening, intensely. She would sit in her living room and read her Bible, watch t.v., or talk on the telephone until time for lunch or dinner. I suppose she let us stay with her and the Bag Lady to give my Mom time to work out some things. Children weren’t privy to details concerning adult situations and life changes during those days. I had become aware of just how often that could happen.

I thought it all a bit weird, Mother Stewart gazing out the big bay window in her living room watching traffic go by, the bag lady in the dim light of her dining room corner talking to herself, and the three of us in the guest room wondering what’s next. There we were, all three of us; Mom, my sister, and me sleeping in one full-size bed in a small bedroom at the front of this narrow row house. Mom had to get rid of all of her possessions, except for our clothes. No one told us why, but I had my suspicions. Everything remaining was in three massive black trunks, Mom called them footlockers. Until then, I had never seen or heard of a footlocker. They were huge, deep, rectangular pieces of wooden luggage with a vinyl skin on the outside and metal hardware. My Mother managed to hold onto a desk and chair for us to do our homework. My whole world had been turned inside out when I was sent from Fannie’s place in D.C. to Chicago. The culture of my new home was very different. Since my arrival, we had moved three times and now, this place. How long were we going to be living here? I always had questions that as a child, I wasn’t allowed to ask without repercussions.

Our Mother worked evenings as a Nurse’s Aide so she would feed us early and instruct us not to leave the room unless we had to go to the bathroom. I would get to lay in the bed with my sister on those evenings and listen to the Bag Lady mumbling to her self or performing her nightly hygiene routine. Mother Stewart would be shuffling around in the kitchen preparing her meal for the evening. We didn’t have a T.V. in our bedroom, no one did in those days. There was one television in the living room, and the entire household shared it. Basically, the children watched whatever the adults were watching. Once the six o’clock news went off the T.V. went off.

I looked forward to the evening’s sounds and wonderful smells. In the quiet stillness of the late evening atmosphere, I could hear the two old ladies talking. I was shocked the first time I heard them because I didn’t think the Bag Lady was capable of intelligent conversation. I thought she could only ramble and sing spirituals. Well, I use the word “conversation” loosely. It was more like the Bag Lady making short declarations and Mother Stewart responding with short responses. It was comical to listen to them an adolescent’s perspective. With a dim light sitting on the small kitchen table Mother Stewart would make mint tea on top of the stove. Until then, I had never had anything other than Lipton black tea that Big Momma, Fannie, would dilute with carnation milk and sugar. I’m pretty sure that Mother Stewart was aware that we were watching from across the hall. Some nights she would offer me and my sister some of her mint tea. Being surprised that we had never had mint tea Mother Stewart showed us the mint plants she grew in the backyard along the back wall of the house. I never knew water with wilted green leaves floating in it could taste so good. She would stand at the little stove in her small narrow kitchen and watch for the water to start to simmer. Then she would add the washed mint leaves and remove the small enamel pot from the hot burner. After a few minutes, she would strain the green-ish water into our cups and added a heaping teaspoon of sugar, perfection. I never forgot this process of making tea from a plant instead of a teabag. It never even occurred to me that this was the foundation for my fascination with teas and herbs , and the different ways to use them decades later.

Frequently the Bag Lady would roast peanuts to sell in the park late at night. She would spread the nuts on a well-worn sheet pan and place them in a hot oven. After some time you could smell the aroma of the roasting nuts all through the house. She would take them from the oven and let them cool, then portion them out into small brown paper bags, what we called candy bags. She would roll down the tops tightly, ready to sell on the street for .25 cents each. Like the tea, roasted nuts were something new to me and the aroma was amazing. The Bag Lady would let my sister and I have a bag of nuts sometimes if we were awake. It became the only way I would eat nuts for the rest of my life. Her sharing her amazing nuts and watching how she and Mother Stewart interacted helped me to overcome my fear of her.

One day I got up the courage to ask Mother Stewart how she and the purple Bag Lady met. She told me that they had been best friends in high school, I was shocked. Friends? How could two people so different from one another become friends? I had always assumed that the Bag Lady had always been crazy. I was twelve, so what did I know about mental disorders. Mother Stewart explained that after graduation, life just took them in separate directions, and they lost track of one another. One day when walking downtown, she saw a woman sitting on the ground feeding the pigeons and selling bags of nuts. She approached the woman to buy some nuts and recognized her old high school friend. She knew something was wrong with her friend, but she couldn’t just walk away and leave her friend in the street like that. So, she took her home with her, and she has been there ever since. The lady in purple didn’t seem to be a burden on her friend at all now that I thought about it. She kept herself clean, she stayed in her space, she didn’t seem to complain at all. She had her own source of income, she loved to sing old spirituals, and read her Bible.

I remember thinking long and hard about the story Mother Stewart told me. What kind of person would see a strange looking purple homeless person, sitting on the ground feeding pigeons and talking to herself decide to take them home with them? A Saint, that’s who. Mother Stewart didn’t just dress and go to church to be seen. She didn’t just sit and read her Bible to pass the time away. This was someone who put what she had been reading about in the Bible into action. She told me she didn’t see a crazy homeless person; she saw her long-lost friend. She remembered how her friend used to be and thought, “But for the grace of God there go I.”

I had forgotten about this period in my life for a long time. Some decades later I found myself in a similar situation with an old friend. Unfortunately, I didn’t remember Mother Stewart and The Bag Lady until some months after the situation was resolved. Tears came to my eyes as I realized that I’m just not that Saint, yet. My friend is safe and well, and we are still friends. Her situation awakened that old memory of friendship from my days in Chicago. I am thankful for that.